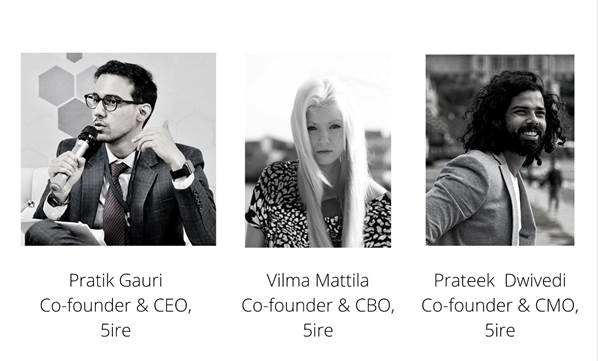 New Delhi– 5ire, the 5th generation blockchain network founded by two entrepreneurs of Indian origin, Pratik Gauri and Prateek Dwivedi, along with crypto financier Vilma Mattila, announced today that it had secured a $100 million capital commitment from GEM Global Yield LLC SCS (GGY) as it seeks to file for an IPO. GGY is a Luxembourg-based private alternative investment group that manages a diverse set of investment vehicles focused on emerging markets worldwide. Prior to this capital infusion, 5ire’s valuation stood at $110 mn upon receiving a funding of $21 million in its seed round from both private and institutional investors like Alphabit, Marshland Capital, Launchpool Labs, Moonrock Capital, among other investors.

By investing in 5ire, GEM will solidify its foothold in the emerging markets for sustainable level 1 blockchains with a highly diversified portfolio of use cases and a growing cache of MoUs with government and private sector partners.

These funds will be utilised for the following purposes:

5ire’s CEO and Co-founder Pratik Gauri said on this occasion, “This infusion of capital from GEM is aligned with 5ire’s vision of going public. We had successfully closed an oversubscribed seed round of $21 million which took our valuation to $110 mn within two months of incorporation. We are really excited about this $100M investment from GEM as it is a testimony to the market confidence in our offering. This is a humbling moment for the founding team, as this shows that we are on the right track. We are grateful to all our investors for the trust shown in 5ire and our mission of embedding the for-benefit paradigm into the heart of blockchain.”

“I am very excited about our partnership with GEM and looking forward to finding synergies in how we further promote our vision of ‘For-benefit’ ventures in the 5ire ecosystem to transition the world from 4th Industrial Revolution to 5th Industrial Revolution, meet the 2030 SDGs and beyond.  I feel that sustainability is not a one-time phenomenon, but a consistent development benchmark here on forward.”, added Pratik Gauri.

“We are thrilled that our vision of impacting the lives of 1 billion people positively is starting to bear fruit. Having raised $21 million in the first two months, and securing a further $100m within just six months has reinforced the founding team’s faith that we have a product that will change the world. The market has acknowledged our hard work and sees things as we see them. We are the only sustainable blockchain in the world and we will continue to work relentlessly until sustainable practises through blockchain and doing good for benefit, become a way of life for businesses.” 5ire’s CMO and co-founder Prateek Dwivedi said on the announcement.

“Sustainable development is estimated to be a $20 – 30 billion dollar market in 2022 that is slated to grow to as much as $50 billion by the year 2030. For us to be able to make an impact on the world, multiple stakeholders in the ecosystem will need to come together and build a community that encourages businesses to do good. With this capital, we aim to develop initiatives that help in community building as well “, 5ire’s CBO and co-founder Vilma Mattila said on the news.

5ire has been working diligently on the UN’s Sustainability goals and partnering with nations across three continents as the first step in this direction. By signing MOUs, 5ire has taken this first step in the public-private partnerships in India, Nigeria, and the United States to bring their technological solutions for sustainability, better governance, more just and transparent law enforcement, and more.