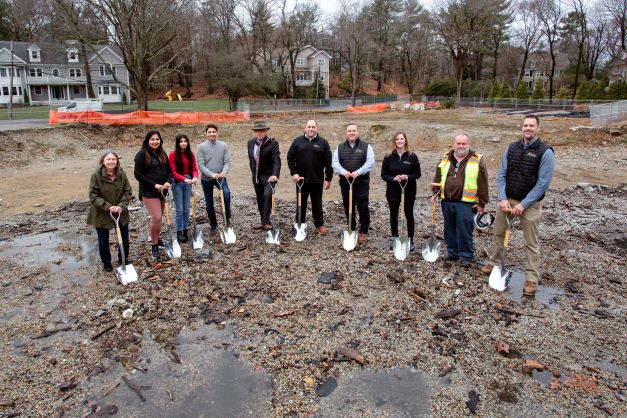 Acella Construction Corporation, a leader in construction management throughout greater Boston, broke ground on the Goddard School® for Early Childhood Development at 193 Central Avenue, the former site of the Milton Hoosic Club, on April 1.

Work on the new building was derailed in March of 2021 when a fire of unknown origin destroyed the historic building and roughly two months’ worth of construction, delaying the project by a year and shifting the scope from renovation to ground-up.  As a result, the ownership group commissioned an entire redesign of the project, at which time they brought in Acella Construction.

The new project will have the Acella team performing all new site work and underground utilities.  (Erosion controls already began prior to the ground-breaking.)  The two-story structure will contain a Schindler elevator and house numerous rooms, including ones for infants, toddlers, and preschoolers. A multi-purpose room featuring a climbing wall, enrichment rooms, and a kitchen are included in the project design, as are conference rooms and offices.

The building’s exterior will feature Hardie Shaker siding shingles and architectural asphalt shingles. An outdoor playground and charging stations for electric cars are also included in the $5-million-plus project.

Acella Construction is slated to complete construction at the Milton site in a 46-week timeframe. This is the second Goddard School for Early Childhood Development in Acella’s construction portfolio.

“Given our early challenges with this project, and the shift from renovation to ground-up as well as all the additional complexities, we were very comfortable moving forward with Acella,” said Sunny Verma, co-owner of The Goddard School.  “Given all of their academic work and ground-up construction experience, we knew they were the best partner for our team.”

“We’re pleased to be called on to help realize this new school,” said Ryan LaVangie, vice president of sales and marketing for Acella Construction. “We look forward to our work ahead, and to seeing the Goddard School open its doors to families living in the Milton area and beyond relatively soon.”

Svitch MotoCorp Pvt. Ltd. is all set to Launch the Stylish CSR 762 for the Young Biking Enthusiasts