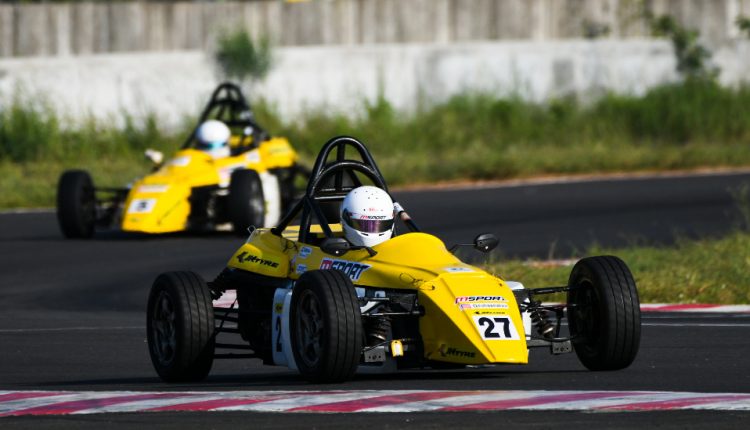 Coimbatore: The Formula LGB4 class was a field full of super stars from Dark Don Racing and Team MSport. But, Amir Sayed outclassed them all to finish on top of the podium for his new team, Ahura Racing, on the opening day of Round 2 of the 24th JK Tyre FMSCI National racing championship at the Kari Motor Speedway in Chettipalayam, near here, on Saturday.

It wasn’t easy for the youngster from Kottayam. He had to battle hard right through before stamping his class. Starting fourth on the grid, he pulled off to a great start. Pole sitter Arya Singh was right up there and so was Sandeep Kumar and Tijil Rao (all from Dark Don). The safety car, which came out thrice, further added to his pressure but he withstood it all to take the checkered flag ahead of Tijil and Sandeep.

“It is such a great feeling to win with a grid full of champions. It really means a lot to me,” said an elated Amir.

Anish Damodara Shetty of Hubli ruled the roost in the JK Tyre presents Royal Enfield Continental GT Cup. The first round king on the big bikes dominated the practice and the qualifying sessions under the morning skies but not the race as Allwin Xavier of Thrissur came on to the track with confidence and a clear plan. He knew he had the ability and the skill to challenge the leader and, he did that creditably well when the race began.

After playing a waiting game at the start, Allwin went full throttle and even went on to catch up with Anish. The former hung on for two solid laps before the latter surprised him with an overtaking move in the first curve of the final lap. Allwin gave his all but it was Anish who had the last laugh.

“It was a 10-lap race and I had to conserve the tyres and the brakes. So, I had to stay a little calm initially,” said a relaxed-looking Anish after the tight fight.

For MSport’s Ruhaan Alva of Bengaluru, it was another memorable day as he finished on top of the podium in the opening race of the JK Tyre Novice Cup. The 15-year-old, who started on pole, cracked into the lead straight away before the race was red-flagged in the very first lap. He did not allow that to bother him and kept a cool head, as he always does, to win the race from lights to flag.

If he is able to win consistently, it is clearly because he has learnt to adapt and think in his car.

“The race was really hot. I did not push really hard as I did not want the tyres to overheat too much. That’s just the way, I take care of my car,” said Ruhaan.

Jaden R. Pariat of Guwahati made it extra special for team MSport finishing a creditable second. Chennai’s Aadithya Parasuram of Hasten Performance had to rest content for the third place.