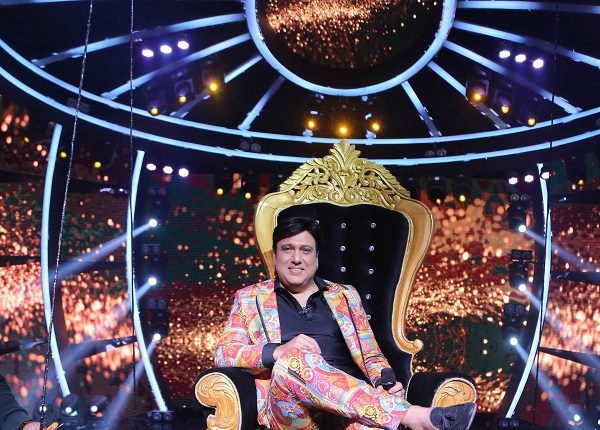 With a rich legacy of over 25 years, Zee TV’s Sa Re Ga Ma Pa has been successful in discovering some truly invaluable gems of the music fraternity including Shreya Ghoshal, Kunal Ganjawala, Kamal Khan, Amanat Ali, Raja Hassan, Sanjeevani, and Bela Shende amongst many others. In the wake of the enormous success of Sa Re Ga Ma Pa Li’l Champs last year, Zee TV is back with its most iconic, longest-running singing reality show that has managed to stay relevant to music lovers across the country – Sa Re Ga Ma Pa 2021. The show started off with a bang and the talented contestants have impressed the audience. However, viewers are in for a special treat this weekend.

The upcoming episode of the popular reality show will showcase the Top 16 contestants engaging in a tough battle of music. While their talent is sure to mesmerize viewers across the nation, we will also see superstar Govinda appear on Sa Re Ga Ma Pa as a special guest this weekend. During the shoot, he took everyone’s breath away with his charming persona, his epic dance moves, and interesting anecdotes. In fact, Govinda revealed quite an interesting anecdote about writing a few lines for some popular songs.

During the Govinda’s special episode, all the contestants recreated the superstar’s superhit songs and left everyone spellbound. In fact, Sharad Sharma and Laj sang Main Toh Raste Se Ja Raha Tha from Coolie No 1 during the shoot, which took Govinda down memory lane and reminded him of the time when he was shooting for the movie and wrote a few lines for the popular song.

As Govinda revealed on Sa Re Ga Ma Pa, “Not a lot of people know but a few lines of the song Main Toh Raste Se Jaa Raha Tha were written by me. ‘Main toh raste se ja raha tha, bhel puri kha raha tha’ was drafted by me, but that’s not it. I have actually written lyrics for a lot of songs, but I have never taken credit for writing them. I never wanted to take credit because not all the words were not set by me, that was done by the writers. I never interrupted them in between as well because its someone’s money, which was invested, and I would never take money for work that was assigned to someone else. I have just professionally contributed to my films.”

Apart from this revelation, Govinda also mesmerised everyone with a few lines that he had written for Gulzar Sahab. The heartwarming words as well as the enchanting performances by the Sa Re Ga Ma Pa contestants will surely leave you mesmerised.

To watch the mesmerising acts, tune into Sa Re Ga Ma Pa this Saturday and Sunday at 9 pm, only on Zee TV!

SEHA urges parents to be aware of Diabetes symptoms in children