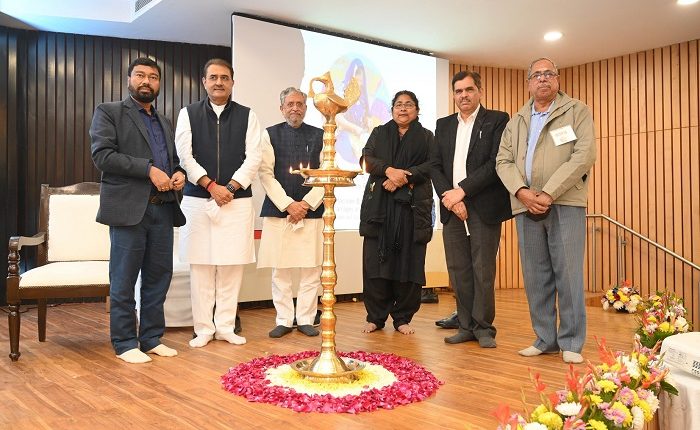 The Mysore Beedi Mazdoor Association released a book ‘A Study on the Lack of Alternate Employment for Women Beedi Workers’ at the India International Centre (IIC) in the capital city, New Delhi, recently. The book, written by Mrs. Vibha Vasuki and Dr Siva Prasad Rambhatla, is an in-depth study of the lives of women beedi workers and the adverse effect of the proposed Amendments to COTPA on their livelihoods.

25 Members of Parliament from across party lines graced the entire evening with their  presence. Seven Women Beedi from Karnataka and Telangana travelled to the capital to make their voices heard, felicitate the dignitaries and launch the book with them. The evening which was dedicated to all Women Beedi Workers, was moderated by Ms. Priya Sehgal and the opening welcome given by Author and  Journalist Rasheed Kidwai to a packed audience of 150, comprising of trade union leaders, workers, and journalists.

Beedi is Swadeshi, Organic, perhaps less carcinogenic, but the implementation of the Amendments to the Cigarettes and Other Tobacco Products Act (COTPA) will further increase grave unemployment situation in India, so there is a separate law needed for the Beedi industry. These were the views of the dignitaries present at the launch of the book on women beedi rollers.

Probably it was the first time that a cross section of people met at the national capital not only to launch a book on India’s women beedi workers—’Study on Lack of Alternate Employment for Women Beedi Rollers’ but also to discuss the future of the Beedi industry since implementation of Amendments to Cigarettes and Other Tobacco Products Act (COTPA) will leave millions of Beedi Workers unemployed.

Why an indigenous product Beedi could not be promoted like a Cigar?

The book launch event began with the opening speech by author and journalist Rasheed Kidwai, who pointed out that it is not just a book release function but about the issue of the livelihood and welfare of 30 million beedi workers,  that too women, which and why a country like Cuba can showcase its Cigar at a global platform. “Cigar brings fame, fortune and money to Cuba, but here we have a very indigenous thing which contributes 25 billion rupees to GDP, which is a very staggering amount, but getting step-motherly treatment.”

Former union minister and NCP leader Praful Patel highlighted the Beedi industry and its importance. “Beedi industry gives employment to people in remote and far-flung areas where there is no other source of work. It has more than 50 per cent labour component and money goes directly to the hands of people. Such industry needs governments support not neglect” said Patel.

Why 28 per cent GST on a Swadeshi product ?

Ashwani Mahajan, national co-convenor, Swadeshi Jagran Manch, who wrote the forward for the book talked straightforwardly. “Earlier there was no tax on beedi, neither excise duty nor sales tax applied on it. They reasoned that it gives huge employment. It gets made in nine states and goes to the entire country, so beedi, sugar and textile used to be exempted. When GST was being implemented, he had thought either there will be no GST on beedis or it will be 5 per cent, but highest GST has been charged on it,” rued Mahajan.

WHO report is itself questionable

All India organizing secretary of Bharatiya Majdoor Sangh, B. Surendran claimed that The World Health Organization (WHO), which reported that 12 lakh people die every year from Tobacco in India on whose basis COTPA is being amended, is itself questionable and that they have asked in their Court Petition that let the data of every hospital, every block should be submitted by WHO, then only they will support it. He also mentioned that Beedi is organic and less nicotine gets used.

Beedi workers are the most marginalised people

One of the authors, Vibha Vasuki mentioned that although Covid constraints could not permit her to study more workers’ lives, the book touched and covered all the aspects comprehensively.

Cuba Cigar is the premium Cigar in the world

The Cuban Ambassador Marin who came to speak with a Cigar in his hand highlighted the Cigar industry and its 1000 year history in Cuba, with early usage of tobacco in healing by indigenous people. He also said that there is a similarity between the hand rolled Beedi and Cigar industry as both have large number of women workers, besides being indigenous. He also mentioned that Cigar industry people had participated in country’s independent movement.

Will surely discuss it

After listening to all the speakers patiently, MOS Rameshwar Teli who himself claimed to be pro labour said, “I know that no such meeting on beedi workers has taken place, so I will talk about it with our senior minister.”

There is a need to lobby for the Beedi industry

Senior BJP leader and Rajya Sabha MP Sushil Modi while saying that it is a complicated matter pointed out that no Government would like to do something which will cause lakhs of people to become unemployed. “I have been associated with GST implementation too. And many people from the Cigarette and other tobacco industry people met us with their grievances but I never met anybody from the Beedi industry. It needs a lobby. Lobbying has a negative image in India, but in the United States, it is systematized.”

Call For Greater Consultation between States and Centre

MP and TMS Trade Union President Ms. Dola Sen requested the Union Minister that for the welfare of Beedi industry and its workers, States should be consulted by the Center before formulating policy. During her speech, Ms Sen raised the slogan, “Save the Industry and Save the Workers”.

On the occasion, The Mysore Beedi Mazdoor Association issued a press communiqué  which said that the Ministry of Health and Family Welfare, Government of India, proposes to amend COTPA 2003. The Ministry has put a draft of the said Bill on their website for comments/views.

Most of the proposed amendments are directly going to affect the livelihood of 2.3 crore workers currently employed in the Beedi Industry. They have no alternative employment. Employing crores of workers overnight is highly improbable, considering the present rate of unemployment.

The proposed harsh and punitive Amendments to COTPA are unreasonable and need to be re-considered so as not to strangulate the Beedi industry.

It is critical to segregate Beedis from Cigarettes and other tobacco products, and to reformulate separate Rules for Beedis under COTPA 2003 while finalizing the proposed amendments and saving this indigenous, high employment generating Swadeshi industry. In the interest of the livelihood of 85 Lakh Beedi Workers, 40 Lakh native Adivasis and Tribals engaged in Tendu leaves plucking, 30 Lakh Beedi Tobacco farmers and workers who are directly dependent on the Beedi industry. Proposed Amendments to COTPA should not be applied to the Beedi industry.