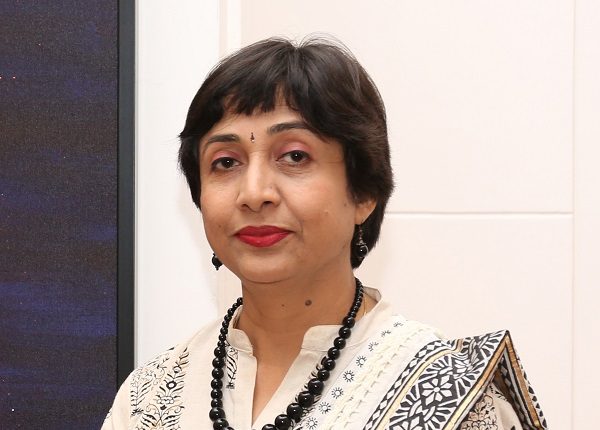 Minakshi, a multi-faceted personality, an artist, poet-writer, Documentary filmmaker and above all government officer -Secretary, Maharashtra state board of Literature and Culture – dabbles in multiple fields since the beginning of her career. This broad spectrum of her personal and creative life generated in her a kind of social and aesthetic commitment. Her paintings, even the abstractions are expression of that commitment.

On Minakshi’s recent paintings, well-known art critic Nanak Ganguly says “her work in acrylic on canvas reveals significantly and highlight consistency of her aesthetic beliefs. She is a painter of unshakeable integrity, of a logical and rigorous intellect, and sincere. Paint is layered yet remarkably fresh, applied in broad brushstrokes so that glimmers of contrasting underpainting occasionally break through the expanses of light and shadow or a wind that stirs at midnight, or at noon”.

In her earlier series of paintings too Minakshi has experimented with the various characteristic of darkness or absence of light. Out of darkness emerges the light. The light may be a splash of lightening or a vibration due to an explosion that may be generated out of a societal/celestial turmoil. These two opposing condition of darkness and light creates a dramatic conflict.

The philosophical background of Minakshi comes into play here. She assimilates tradition with contemporary reality. In one of her earlier phases of painting Minakshi worked with realistic form, where naturalistic delineation was transformed in a very subtle way in the line of Western pop art.

Nanak Ganguly sums up about her painting ‘A formal rigour and invention, Minakshi’s language provides unending possibilities for learned elucidation and decoding gestural rhetoric. It also consists of regimes of restrained palette, create rhythms set up by the distribution of paint and the grouping dark and light masses. The colour sequence of brown ochre, black, cobalt- blue, red and grey- her regular palette is reversed or echoed in a different part of the painting setting here an ochre pause and there a red note, a green flourish or a blue glissando.  Minakshi’s paintings immerse us in an expanse of shimmering light”.

It’s a High 5 for MTV Beats

The Real GDP Growth Will Be Higher Than the Pre-Pandemic Levels: Dr. Arvind Virmani

Union Budget 2022-23: an opportunity for decisive transformation and win back India’s…