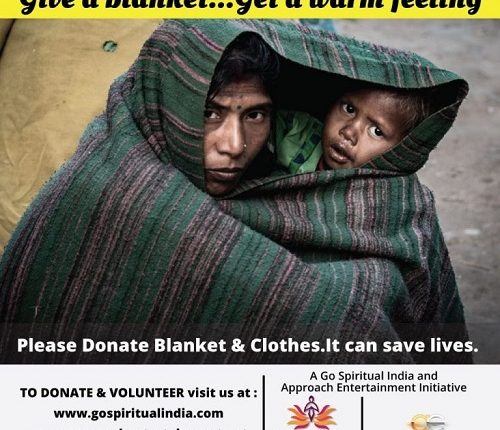 Mumbai: Award-Winning Celebrity Management & Films Productions Company, Approach Entertainment & Charitable Spiritual Organization,  Go Spiritual India launched Blankets Donation Campaign in North India. The campaign has been launched with an objective to mobilize blankets, clothes, and food donation drives for the homeless in major cities of North India. Go Spiritual India is running the blanket donation campaign since 2017. The campaign will spread awareness about the plight of the homeless & destitute in Winters and motivate people to donate blankets, clothes & food themselves, or inform Go Spiritual India to arrange Blankets for the needy. Approach Communications is handling PR, Digital & Communications for the Blanket donation drive while Approach Entertainment is working on the production of videos, mobilization through celebrities & influencers, events, and related activities.

In addition, Go Spiritual India also encourages people to take up this cause on their own and distribute blankets in their respective areas and region as the objective is to ensure help to as many people as possible by reaching out to them in whatever way is possible. Go Spiritual India blanket donation drive is being supported by Approach Entertainment & Approach Communications.

For the past few years, Go Spiritual India has been also engaged in the distribution of blankets especially to the poor and homeless people during the winter months. Though there are no official records of country-wide deaths due to harsh winters every year in the country, some data collected by some NGOs suggests that more than 369 persons had died in 2019 due to winters in Delhi alone and thousands died in the country.

Even in the year 2020-21 winters, thousands died due to winters. According to the 2011 census, there were 17.33 crores homeless people in India and this figure in 2021 is estimated to be at least 26 crores. Even if it is assumed that half of them may be living in North India where the winters are rather harsh, it is easy to imagine the plight of the homeless people every winter.

Go Spiritual India Organization, an initiative launched by Sonu Tyagi and his company Approach Entertainment is dedicated to charity and spiritual work. For the past few years, it has taken serious endeavors towards charity.  It was actively engaged in the distribution of free food to the needy during the lockdown when the poor had no means to even earn their basic meals. During the winters, Go Spiritual had launched an initiative to distribute blankets to the homeless people for whom the streets are home, particularly in Northern India, where the winters are rather harsh!

For More Information or to Support Our Blanket Donation Initiative:

A World Of Flavours At Your Doorstep

Nua addresses the monthly-acne problem, with its…