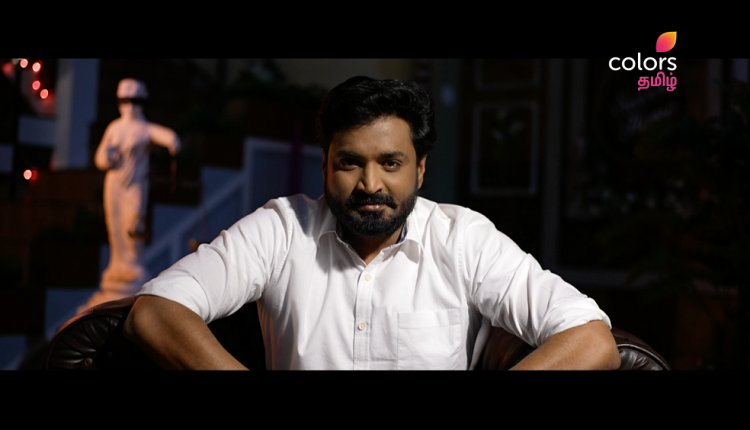 ~ Set to premiere on 27th December 2021, the show will be hosted by Actor Senthil Kumar and telecast from Monday to Saturday at 10.30 PM ~

Chennai : Building on the success and popularity of its fiction shows, Colors Tamil, the fastest-growing GEC of Tamil Nadu, is sprucing up its prime-timelineup with the launch of a brand new docu-drama JagameThandiramKathaigal.This crime series will bring to light a slew of gripping accounts of real-life crime. The channel has roped in popular Actor Senthil to present the show which will be telecast from Monday to Saturday every week at 10:30 PM.

JagameThandiramKathaigal will premiere on Colors Tamil Channel on 27th December 2021, Monday at 10:30 PM.

Commenting on the launch, Mr. Rajaraman S, Business Head – Colors Tamil said, “Colors Tamil, Tamil Nadu’s fastest-growing GEC channel, has premiered a number of groundbreaking programmes. Our fiction shows have become cult classics, and we’re excited to continue the trend by adding another intriguing show to the line-up. Popular actor Senthil will represent the voice of the people to create awareness about critical issues in the society, with JagameThandiramKathaigal acting as a reflection of what is going on in society. We hope that the show will enhance the awareness levels of our audiences towards potential risks that lurk in our society and help them to anticipate and face them better.”

The show, which will initially span 30 episodes, will try to create awareness among Tamil-speaking viewers on a variety of social issues like domestic abuse, police brutality, student suicides, gender discrimination, spiritual hoax, and more. It also intends to send a message to everyone about how they may avoid being victims of the same. The hour-long show will also include dramatic recreations of terrifying real-life situations from across the country, giving viewers a true sense of what happened.

Sharing his thoughts on hosting the show, Actor Senthil Kumar said, “I am honoured to present JagameThandiramKathaigal since it represents a fractured segment of society, and being able to discuss such important concerns that many people face is particularly eye-opening for me. I’m hoping that after witnessing the show, the audience will feel the same way, and I’m really looking forward to it.”

Colors Tamil has also weaved in an innovative social campaign across their handles as a countdown to the show. It is encouraging people to voice their views and experiences related to social injustice in the society.

The three main themes are domestic violence, harassment against women and child abuse and the hashtags are: #JagameThandhiramKadhaigal #JTK #RJSenthil #ColorsTamil #ManasaatchiyinKural.

People from various parts of the nation have already begun sharing their experiences. The channel aims to create public consciousness over such issues, deeming it important for everybody to speak up against these problems the moment they face it, rather than after years.

Tune in to Colors Tamil from Monday to Saturday at 10:30 PM to watch hair-raising stories from various regions in the country. Colors Tamil is available on all leading cable networks and DTH platforms – Sun Direct (CH NO 128), Tata Sky (CHN NO 1515), Airtel (CHN NO 763), Dish TV (CHN NO 1808), and Videocon D2H (CHN NO 553). Viewers can also tune in to VOOT any time to see them at their convenience.