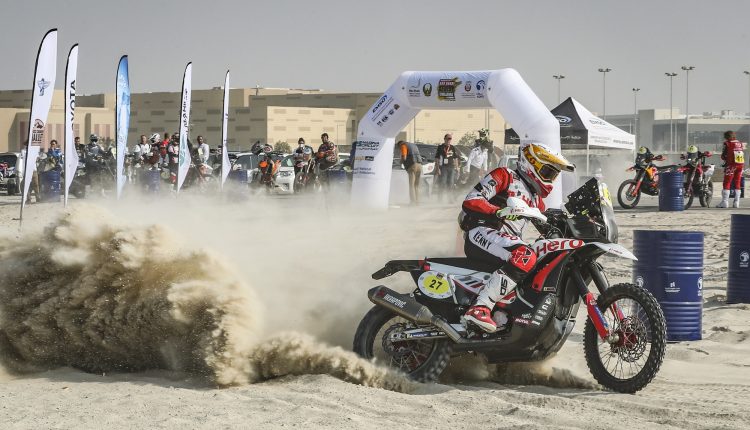 Hero MotoSports Team Rally,the motorsports team of the world’s largest manufacturer of motorcycles and scooters – Hero MotoCorp, has commenced the Abu Dhabi Desert Challenge, in the capital city of the United Arab Emirates, in top gear with all three riders – Joaquim Rodrigues, Sebastian Buhler and Franco Caimi – finishing the Prologue Stage inside the Top 10 positions.

This is the final round of the FIM Cross-Country Rallies World Championship before the Dakar Rally 2022.

Franco Caimi and Joaquim Rodrigues are currently in seventh and ninth places in the Championship respectively, with Buhler in 12th. A strong performance here will bring the riders within the Top 10.

After completing the administrative checks and the vehicle scrutiny on November 5, the riders took to the start line for the Prologue, on November 6, a short 2km sprint along the beach that determined the start order for Stage 1.

Caimi finished the stage with an average speed of 90 kmph, registering the fourth fastest time of the day with Rodrigues just a second behind him. Buhler finished in 10th position.

The first full stage of the rally starts on Sunday, November 7, running for 262 kms of specials in the Arabian Deserts. The Rally is scheduled to run for five more days, covering over 1900 kms, with close to 70% of that distance in special stages.

Wolfgang Fischer, Team Manager, Hero MotoSports Team Rally: “We are in Abu Dhabi for the final round of the Cross-Country Rallies World Championship. The Desert Challenge is a classic desert race, running for the past 30 years, but it is our first time here as a team. The stages are mostly in the dunes and sand, and this is a good training for the riders before the Dakar, which is also expected to have more dunes this year. All the riders are fit and ready and we are excited to welcome our teammate CS Santosh. He is here only as a visitor, but it is good to have him back with us. The team is motivated and we are looking forward to a good race here before the Dakar.”

Joaquim Rodrigues, Rider, Hero MotoSports Team Rally: “We finished the Prologue, which was pretty calm. But this is just the beginning, and on Sunday we start the first stage out of five stages here. This will be our final race before the Dakar, so I hope that everything goes well.”

Franco Caimi, Rider, Hero MotoSports Team Rally: “It is my first time in Abu Dhabi and I am really happy to be here. I have raced in many deserts around the world, and I feel like I know them really well, so I’m looking forward to getting to know this desert as well. The team is working perfectly and this is our final test before the Dakar 2022, so this is going to be an exciting week for all of us.”

Sebastian Buhler, Rider, Hero MotoSports Team Rally: “The prologue was short but nice. It was hot down by the beach, but I am getting used to the weather. The team has worked hard, the bikes are running well and I am feeling good, so looking forward to a good rally.”

Satish Cheeti to be the President of Brightcom Audio

Bounce Partners With Park+ To Scale Battery Swapping Infrastructure Across 3,500+…