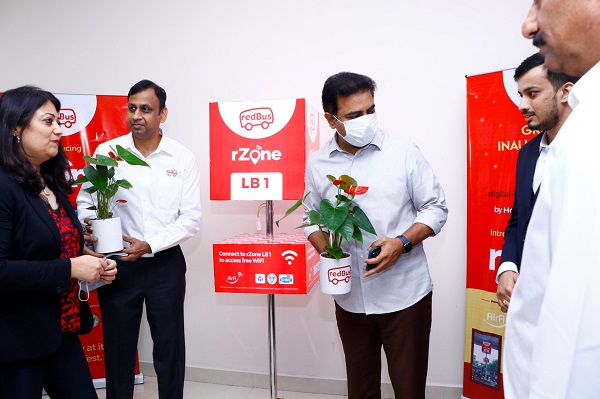 Hyderabad : redBus, India’s largest online bus ticketing service, has launched a new digital bus boarding facility called ‘rZone’, in Hyderabad, which is a physical installation, identified visually as well as on the redBus app, to help the traveller identify their exact bus boarding point and board the bus without uncertainty or anxiety. An rZone consists of a tall pole with a large cube-like structure at the top, displaying a unique code and redBus branding, to help travellers identify the boarding spot easily. The rZone code appears on the app as well as the bus ticket along with the other details for the convenience of the traveller.

While bus transport offers one of the most convenient means to travel between cities, boarding a bus at a location other than major bus stations or terminals, poses certain dilemmas, including unfamiliarity with the exact location of pick-up. This is particularly true when travelling for the first time on a particular route or with a new bus service and can be stressful for the traveller. rZones eliminate this situation by creating a common touch point for both, the traveller as well as the bus crew. The redBus app directs the user to the right rZone for boarding, while the bus crew is aware of the passenger’s exact location for pick-up.

In addition, rZones offer free Wi-Fi in its vicinity for travellers to identify the exact location of their bus, as well as estimated time of arrival. By scanning the QR code displayed prominently at the rZone, travellers can instantly search & book bus tickets online.  All rZones are readily recognized on Google maps through markers to help users navigate to their boarding points easily.

redBus has launched 32 rZones in Hyderabad as part of the pilot, and will scale it to 130+ installations in the city by the end of April, 2022. The rZones in Hyderabad are located at Ameerpet, SR Nagar, LB Nagar and Punjagutta and have been installed through an agreement with the Greater Hyderabad Municipal Corporation , HY-FI( Hyderabad City Wifi Project – a Govt. of Telangana Initiative ) and in association with AirFi, a T-Hub incubated tech company founded with a vision to transform bus infotainment system into a fully-fledged Wi-Fi enabled travel experience to all passengers.

Speaking on the launch of rZones in Hyderabad, Prakash Sangam, CEO, redBus, stated, “redBus has pioneered several features in the intercity bus transport segment, both from a traveller convenience as well as safety perspective and rZone is the latest addition to this. rZone is a strong example of how technology can transform the experience of public transport, making it efficient, convenient and safe for the people, especially where boarding an intercity bus at the right spot and at the right time is concerned.

The anxieties associated with the prospect of missing their bus is not what we want travellers to go through before their journey. Hence, the concept of rZone, which is a high-tech bus stop that helps the traveller and the bus crew converge at a common point for a stress-free boarding experience. Our partner bus operators have enthusiastically participated to help make this concept a success. We would also like to thank the Government of Telangana & Greater Hyderabad Municipal Corporation for their support in this endeavour and look forward to scaling up the rZone project across Hyderabad soon.”

10 Reasons Why Yas Island, Abu Dhabi Should Be on Every Traveller’s Bucket List

Experience the shared essence of patriotism with Snapchat…