StudioNEXT gears up to launch their upcoming original, The Whistleblower on SonyLIV 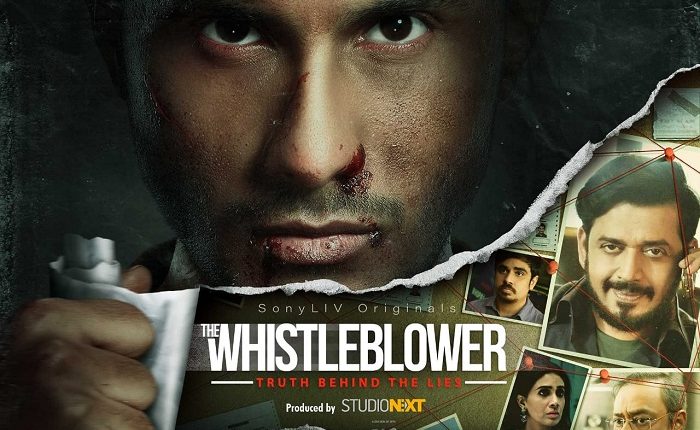 Chennai : Whistleblower – a person ‘within’ or ‘outside’ a system who exposes deep-rooted corruption in the particular system. He does this despite the innumerable personal sacrifices that come his way, following the single goal of bringing out the truth to the larger public. Inspired by a series of true events across India, SonyLIV’s latest fictional offering, The Whistleblower, delves into a secret world of an educational scam. Packed with strong performances, the series features talented actors Ravi Kishan, Ritwik Bhowmik and Sonali Kulkarni in leading roles. Produced by StudioNEXT, The Whistleblower is all set to leave viewers gripped from 16th December.

The show traces the journey of Dr. Sanket played by Ritwik, a final year medical student who gets himself entangled in a chain of events that trigger chaos within a system. The repercussions of Sanket’s actions take a toll on his personal life and his world starts to crumble.

The Whistleblower is a fictional story but is absolutely relevant to India. We are happy to bring a power-packed narrative that has been put together by StudioNEXT, Manoj Pillai and Ajay Monga.

At StudioNEXT, it’s our endeavour to present to our viewers ‘entertainment shows with a purpose’. KBC, Scam 1992, Dhadkan Zindaggi Kii or soon to be released Shark Tank India, are a testament to our efforts. In line with this thought, we are excited to present an impactful and compelling story with The Whistleblower. With a brilliant set of actors, the series has been spearheaded by a strong team led by the creative vision of Ritesh Modi. Ajay Monga’s writing and Manoj Pillai’s direction brilliantly work together bringing alive the story with utmost authenticity.

The Whistleblower is a fictional story with shades of real incidents that have frequently occurred around us. Hence it was our priority to keep the story authentic and engaging in its narration. I am very delighted that the show stands high on parameters that makes it a compelling watch.

This is my first directorial-debut and I couldn’t have asked for a story better than this. The script is new-age, pathbreaking and bold. I am elated to be backed by SonyLIV and StudioNEXT who are known to push the bar and create authentic and gripping content.

The Whistleblower is a story of a privileged medical student who takes his lifestyle and opportunities for granted. His casual approach and reckless actions result into his own moral compass of right and wrong being compromised. Later, his conscience ultimately leaves him with no option but to turn into a Whistle-blower.

Playing a character like Sanket in The Whistleblower has been challenging yet fulfilling. The script and director’s vision helped me shape the character of Sanket and bring depth to it. I am grateful to SonyLIV and StudioNEXT for this career-defining opportunity.

Jayraj’s character has been one of the most interesting one in my career. The character has many layers and needed to be played with utmost conviction. I hope the viewers find it interesting and enjoy watching it as much as I enjoyed playing it.

Watch The Whistleblower from 16th December only on SonyLIV!

Celebrate the love for Handmade this Christmas!