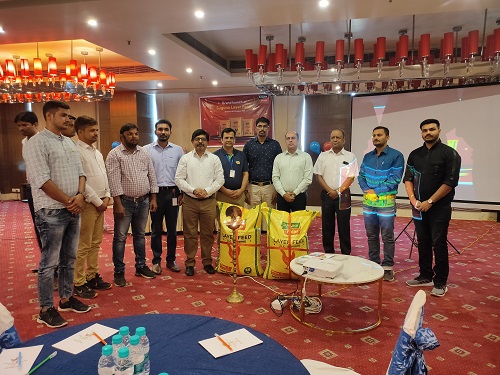 Mumbai: Suguna Foods, one of the leading poultry companies in the country has launched ‘Layer chicken feed’ in Bihar.

Layer chickens, are a breed of hens having a significantly enhanced capacity for producing eggs from 18-19 weeks of age and continue till 80 weeks and above.

The conglomerate has launched 4 types of Layer feed, each designed to be given to the hens at various stages during the bird’s life cycle.

Layer Chick Crumble feed is recommended from 0- 8 weeks which helps in gut development and strives to improve growth rate, weight gain and enhances the immunity of the flock. This highly nutritive formulation aims to reduce early chick mortality (ECM) and consequently improves the livability of the flock.

Layer Grower Crumble feed is recommended from 9 – 17 weeks. It helps to maintain the skeletal body frame and organs development. This nutritious feed has been meticulously formulated to reduce pullet mortality and ensure flock uniformity.

Layer Crumble feed has been formulated for two phases, based on stage of the birds. Phase 1 is recommended between 18- 52 weeks while Phase 2 can be used from 53 weeks onwards. At both the stages, this wholesome feed aids in maintaining peak egg production and helps in achieving optimum egg weight and ensure strong egg shells.

Commenting on the launch Suguna Foods said, “Suguna Feeds takes immense pride to extend their nationwide operations by launching their Layer feed range in Bihar. With a strong & proficient team of expert poultry nutritionists & veterinary experts working round the clock to provide best feed for layer birds during various stages of life, the company assures in delivering premium quality feed at affordable rates to satisfy the needs of commercial layer farmers across the nation.” He added, “Through the complete range of highly nutritious layer feeds, Suguna Feeds is confident in helping farmers to accomplish the performance goals of layers at every stage of life. With the intervention of the Bihar government’s Department of Animal & Fisheries Resources in providing incentives and subsidies for the welfare of poultry farmers, the growth rate of the poultry sector in Bihar sounds highly promising.”