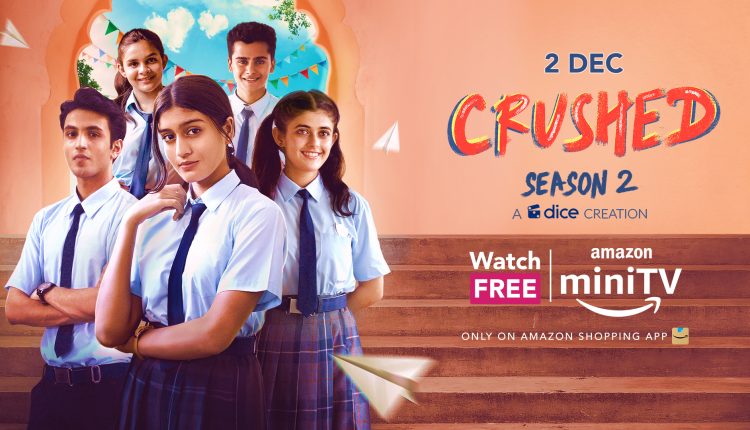 Produced by Dice Media, The new season of the highly popular show featuring  Aadhya Anand, Naman Jain, and Urvi Singh in pivotal roles is set to premiere from December 2

Mumbai : Amazon miniTV – Amazon’s free video streaming service is set to bring to you the second season of one of its most loved series, Crushed. Created by Dice Media (Pocket Aces), the series will feature talented actors including Aadhya Anand, Naman Jain, and Urvi Singh, among others. Audiences are in for a treat as the new season will stream exclusively on Amazon miniTV from December 2.

Directed by Mandar Kurundkar and written by Tatsat Pandey, Abhinav Vaidya, Sankalp Raj Tripathi, the show will take everyone through the lives of Aadhya (Aadhya Anand), Jasmine (Urvi Singh), and Prateek (Naman Jain) as they experience the highs and lows of adolescent love. In the second season of Crushed, these youngsters will be facing their future and evolving as individuals as fate presents new challenges in their lives. Facing roadblocks that challenge their friendship, love, and all other relationships they build, Season 2 of Crushed promises high entertainment and drama throughout.

Commenting on the launch of Crushed Season 2, Aadhya Anand shared, “The last season was incredibly successful and got so much love and adulation from the audiences. The second season of Crushed will show how our characters evolve as individuals while preparing for the board exams. I hope that the viewers will love the new season just a little more than they loved and enjoyed the last one.”

Sharing his thoughts on the new season, Naman Jain shared, “The announcement of Crushed Season 2 brings me immense joy, as the story truly sees our characters evolve and grow. This new season will have more twists and turns than the first one and I only hope that the people watching love it.”

Talking about Season 2 of Crushed, Urvi Singh shared“It brings me great joy to be a part of the second season of Crushed. This season will see character growth, emotions, and a lot of drama that these students have to face over their academic responsibilities. I’m grateful to Amazon miniTV which will bring this show to the youth who can totally relate to it.”

Crushed S2 is a school drama that promises high entertainment and drama. The series will premiere from 2nd December on Amazon miniTV for free, available within Amazon’s shopping app and Fire TV.