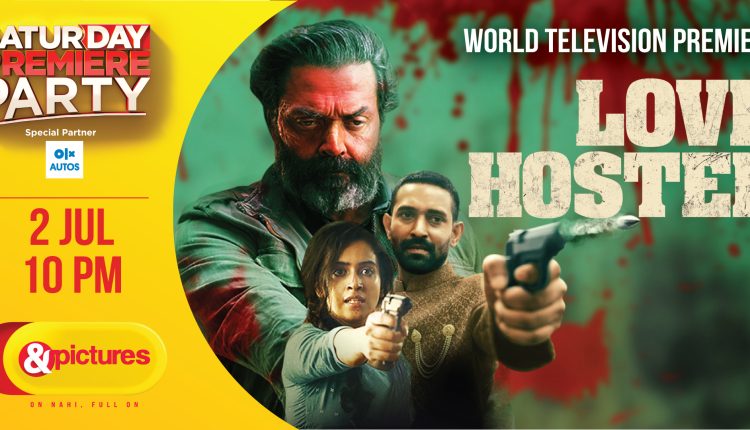 All is fair in love and war! Presenting one such tale of innocent lovers and a lethal hitman jahan hogi Fight love & Life ki with the World Television Premiere of Love Hostel on &pictures. This slick thriller, rendered with tensile drama and a gripping plot, director Shanker Raman’s Love Hostel is a representation of some cold-blooded sentiments, showcasing the magic of authentic storytelling. On Saturday Premiere Party where &pictures premieres new movies on the channel every Saturday night, get ready to check-in to the Love Hostel with the World Television Premiere on 2nd July at 10pm only on &pictures.

Set in the depths of Haryana, when Jyoti and Ashu sign their official marriage certificate, they not only declare love for each other to the world but also put their lives into danger. Thus, begins the deadly chase and trail of dodging bullets. Displaying impactful performances as two young’uns in love, Vikrant Massey and Sanya Malhotra are seen dissolving in their respective characters, Ashu and Jyoti along with Raj Arjun, Aditi Vasudev and Akshay Oberoi in pivotal roles. The film also introduces the outstanding Bobby Deol as a Dagar, a ruthless killer – a character that is ought to send chills down your spine.

Talking about his role, Bobby Deol said, “A character like Dagar is something that I have not played before. It was a completely new experience for me as I had the chance to learn a new language and it was the first time that I had to undergo the process of prosthetics for a film. I never really had the chance to showcase this side of me and it was indeed a great experience to step out of the box and essay the challenging role of Dagar.  When I read the script of Love Hostel, I envisioned exactly how I had to play out my character to make it look as authentic as possible. As I kept reading about him, I understood his emotions and tried to get into the skin of it. This film is an eye opener for the youth of today and educates them on the realities of life. I am sure the audience will have a roller coaster of time watching the film on &pictures.”

“Love Hostel compels you to think and introspect. I would say, this film helped me grow as an artist as well as an individual. It makes you realize how lucky we are. I was so engrossed in my character that I felt every emotion that he underwent. And not just me, Sanya and I both took a little time to get out of our characters and feel like our normal selves. We have given it all to this film and I’m sure the audience will love the film as much as we do.” said Vikrant Massey.

Talking about the film, Sanya Malhotra said, “It is very important for me to be on the same page as my character. Love Hostel required a certain degree of emotional maturity to separate personal emotions from my character Jyoti. While the film has an inherited sense of thrill with a deadly assassin chasing Ashu and Jyoti, at the same time, it has an emotional touch to it. It was a character that I really enjoyed and made me exposed to people who are in these situations.”

Pyaar ke do panchi aur ek deadly assassin! Escaping the world of hate and ire, Jyoti and Ashu find solace in the beaten safe house away from the unruly grip of their families. Unaware of the wrath of their folks, the young couple are set on an indefinite journey to save themselves and a cruel killer scavenging them.